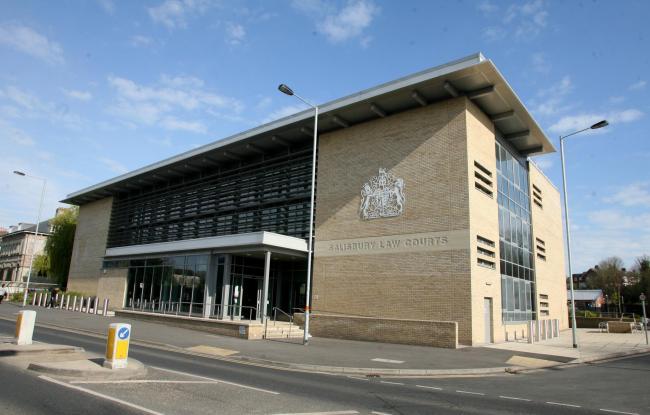 AIDAN RUDLAND, aged 21, currently of Winchester Prison, pleaded guilty to assaulting a woman by beating in Salisbury between January 20 and 25. He also pleaded guilty to damaging property belonging to the victim. Rudland was committed to three weeks in prison concurrent and was ordered to pay a surcharge to fund victim services of £122.

LISA GOODALL, aged 26, of St Andrews Road, Warminster, was found guilty of driving while exceeding the legal alcohol limit. On November 28 last year she was driving a Volkswagen Polo along Wishford Road in Salisbury, with 40 micrograms of alcohol in every 100 millilitres of breath. She was fined £100 and was ordered to pay a surcharge to fund victim services of £32 and costs of £150. The defendant was also disqualified from holding a driving licence for 21 days.

STEPHEN HARRISON, aged 37, of Barrington Road, Salisbury, pleaded guilty to using threatening behaviour or words, that were likely to cause alarm or distress, in Salisbury on May 13. A restraining order is now in force, meaning Harrison cannot contact the associated woman, and his time spent in custody was considered time served for the offence. He was fined £40 and was ordered to pay a surcharge to fund victim services of £32 and costs of £85.

NEHEMIAH BROWN, aged 34, of Devizes Road, Salisbury, was found guilty of driving while disqualified from holding a driving licence. The incident took place on January 28 last year when Brown was driving a Volkswagen Golf along the A345 in Netheravon. Brown pleaded guilty to driving while exceeding the specified limit of a controlled drug, more than seven micrograms of drug per litre of blood, on December 9 last year. Brown was driving a Volkswagen Bora along Princess Way in Amesbury. The defendant was committed to prison for 18 weeks suspended for 12 months, and must carry out 150 hours of unpaid work. He was ordered to pay a surcharge to fund victim services of £122 and costs of £100. He was disqualified from holding a driving licence for three years.

TROY RUSSELL, aged 24, of Barnard Street, Salisbury, indicated a plea of guilty to trespassing and stealing. On October 6 last year Russell entered Cedars Sports Bar in Salisbury and stole four bottles of alcohol. Patio doors and a polycarbonate sheet were damaged to the value of £600. He was ordered to pay compensation of £60, a surcharge to fund victim services of £90 and costs of £85. Russell must attend appointments and activities as instructed by officers, and must carry out 80 hours of unpaid work.