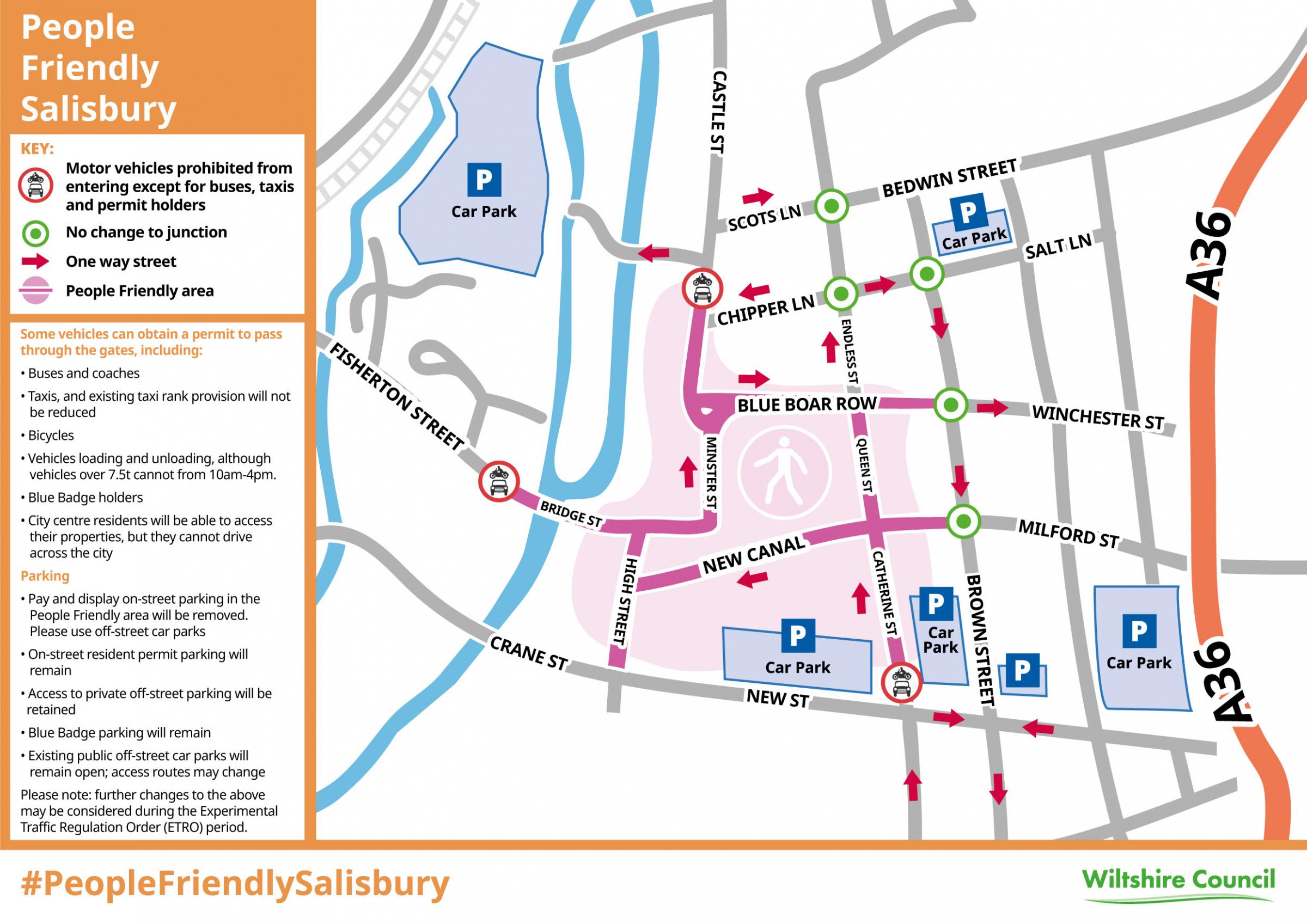 THE final plans have been announced for the People Friendly Salisbury scheme, which will see several streets in the city centre restricted for use by through traffic.

Following feedback from residents and businesses, the experimental scheme has been altered, with two areas removed from the plans.

The first stage of the scheme will no longer restrict access to the Castle Street entrance of Central Car Park and Chipper Lane; and part of Endless Street will also be removed from the initial scheme.

The scheme will be fully monitored throughout its 18 months, with 47 sensors providing anonymous data on vehicle and pedestrian movements within the Low Traffic Zone (LTZ), on the A36 and at other key points in the city.

The sensors are already in place to help establish some baseline levels of traffic flows and other movements, while the main scheme will begin to be installed on October 20, and be operational from October 21.

As well as cyclists and pedestrians, some vehicles will be able to access the LTZ. These include:

Access to the LTZ will be managed by vehicle number plate recognition cameras, and residents and businesses will need to apply for free permits to access the zone.

Additional funding has also been announced for the scheme, with Swindon & Wiltshire Local Enterprise Partnership (SWLEP) contributing £1.3m, meaning an “additional range of accompanying measures” will be developed, including e-bikes bike parking and maintenance stations, more seating and greenery, and improvements for pedestrians.

Cllr Wayman added: “It’s great news that work on People Friendly Salisbury is starting in the next few weeks, and that the scheme will be in place before half-term week.

“We have listened to people’s comments on this scheme, and made adaptations where necessary, and we will continue to do so. The project is subject to an Experimental Traffic Regulation Order (ETRO) and as such, people can make comments throughout the first six months of the scheme, and we can make changes based on feedback and our own monitoring of it.

“We are also writing to all residents and businesses in the LTZ to explain more about the scheme and how they can obtain a free permit to access the zone in their vehicles.

“We hope it will also bring positive increases on the numbers of visitors and shoppers to the city, and a reduction in shop vacancy rates, as we have seen in similar projects around the country.

“For the scheme to be a success, it’s also important that people making short journeys through the city consider whether they could walk or cycle for those short trips, as this can have a positive effect on their health, and help to improve the city environment.”

As well as the £1.3m in SWLEP funding for measures to accompany this project, a further £6m in SWLEP funding has been awarded to the Salisbury River Park project, a joint scheme with the Environment Agency to help reduce the flood risk to various areas in the city and improve leisure and recreational uses, as well as ecology and biodiversity enhancements.

To apply for a free access permit for the LTZ, go to wanttopark.com/Wiltshire before Wednesday, October 21, when the LTZ will come into force.

People can also apply after this date and throughout the 18 months of the scheme, but if they want access from Wednesday, October 21 onwards, they will need to apply beforehand.

Unauthorised vehicles that enter the LTZ will be issued with a Penalty Charge Notice.

To find out more about People Friendly Salisbury, and to read FAQs, go to wiltshire.gov.uk/salisbury-people-friendly-streets.

“Act as if you have the virus” is the message sent out by the leader of Salisbury City Council following the continued increase in cases and deaths in the city. Salisbury Journal | News …

THE top four groups set to receive the Covid-19 vaccine have been confirmed by the government, as the vaccines delivery plan is published in full. Salisbury Journal | News …